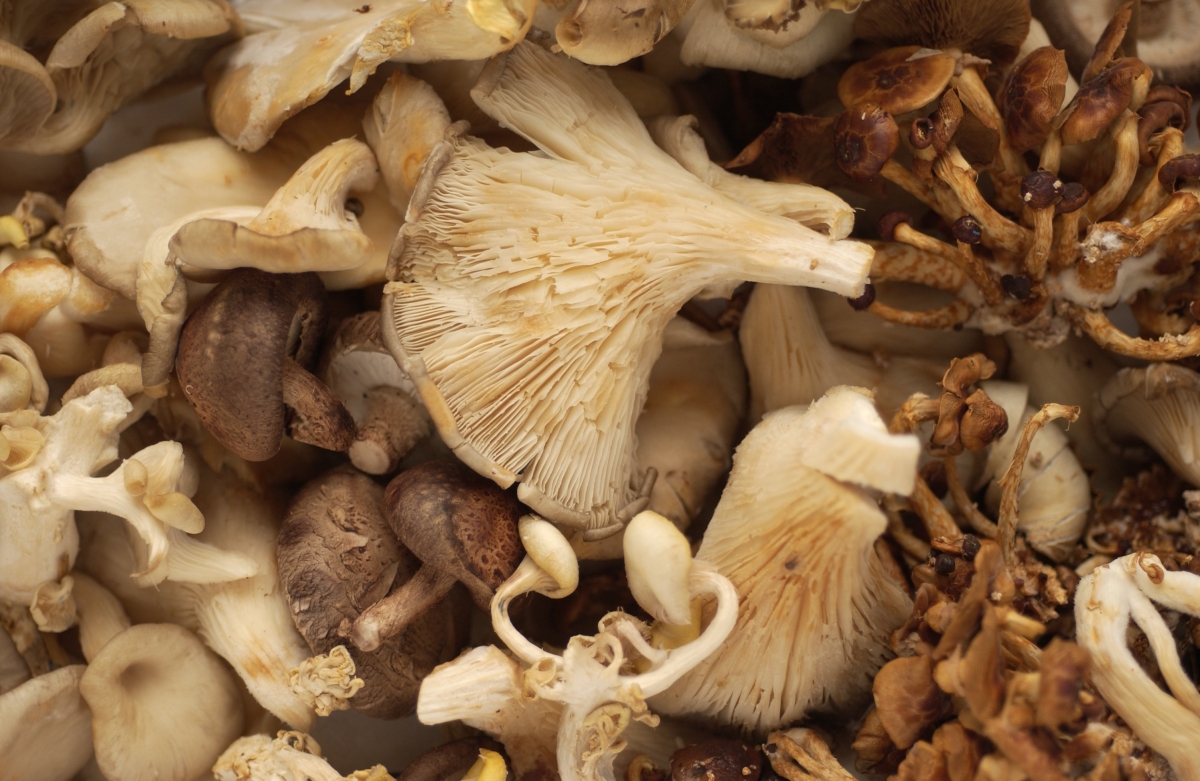 Dice the onion and garlic. Chop the carrot. Smash the garlic. Sweat the onion for 2 minutes, then add the garlic and carrot and cook for 2 more minutes. Add the stock and cook till the carrots are very soft. Remove from heat and liquidise. Garnish or blend coriander to serve.

Slice the mushrooms. Wash the rice. Finely dice the onion. Chop the herbs. In a pan, cook the mushrooms in a little oil. Remove and keep warm. In the same pan, sweat the onions in the butter, but do not allow to colour. Add the rice and garlic. Add the stock a little at a time. Cook on a low heat till the rice has absorbed the stock and tender. Add the mushrooms and herbs.

Chop the herbs. Mix in with the butter. Poach the salmon for 6 minutes in the water. Remove the salmon and keep warm. Reduce the stock. Add the herb butter and whisk into sauce.

Mix the ingredients together and lay on a roasting tray. Add salt. Place in the oven 160degC/Gas mark 4 for 40 minutes or until tender.

Soften the butter. Separate 6 eggs – you only need the yolks. Grease a 3pt oven proof dish with some of the butter. Make 6 bread and marmalade sandwiches. Cut the sandwiches into triangles. Place sultanas in the dish with sandwiches on top. In a bowl, whisk together 2 whole eggs and 6 yolks and sugar. Mix the milk, cream and vanilla in a pot. Bring to the boil. Add in the egg mixture while stirring. Pour half the egg mix over the bread. Let it soak. Pour in the rest of the mix and the rest of the sultanas. Cook for 20-30 minutes at Gas mark 4/ 180decC/ 350 deg F.

Chop mushrooms, onion and garlic and pick thyme leaves. Add butter to pan then sweat onions and garlic adding mushrooms and thyme, then cover with stock. Boil then simmer to cook. Blend soup and serve.

Peel and slice the orange. Heat the sugar in a thick-bottomed pan. Add the water and Drambuie and it will turn to caramel. Pour over the sliced oranges.

Peel and chop the potato. Chop the coriander. Boil the potato. Mash and season. Add the potatoes to the crab meat. Add a squeeze of lemon and the coriander. Shape and coat in flour. Pan fry in a little oil. Turn over and add the butter and cook till hot.

Chop the parsley. Finely dice the shallot. Put the lentil in a pan and cover with the stock. Boil until just cooked. Drain the lentils. Add the rest of the ingredients to the drained lentils and season.

Peel the potato and slice longways. Place in oven tray. Drizzle with oil. Cook for 10-12 minutes.

Peel and chop the turnip and potato. Keep separate. Separately, boil broth. Drain. Mash. Season. Divide the butter between the two. Place the haggis in a ring, then the mashed turnip on and potato to fill. Put in the oven for 10 minutes at 200 deg C. Remove the ring and serve

Separate the eggs, you only need the yolk. Grate the cheese. Melt the butter and add the flour. Mix. Slowly add the milk to thicken the sauce. Add cheese slowly, stirring. Remove from heat and leave to cool. Season. Add the egg yolks and parsley. Spread over the fish. Bake in a pre-heated oven for 5-8 minutes at 2000 deg C until golden brown.

Peel and chop the onion and potato.  Very finely slice the leek.  In a pot warm the butter.  Add the onions. Cook without colour for 3 minutes. Add the potato and stock. Simmer for 10 minutes. Add the leeks . Cook for another 2 minutes. Liquidise and return to the pot, add the cream. Season. Meanwhile, slice the baguette into squares. Bake till golden brown. Serve with chopped chives.

Finely chop garlic and chilli. De-core and half tomato. Put all of the above ingredients on the tomato. Place on lightly greased, grease proof paper or silicon mat. Bake in the oven at 125 deg C for 60-90 minutes.

Chop carrot, celery leek and shallot. Cook vegetables in a pan with a dash of vegetable oil for 1 minute. Add lentils for 10-15 seconds then add the vegetable stock. Bring to boil and simmer until lentils are “al dente”. Season with vinegar and olive oil

Mix the ingredients together and lay on a roasting tray. Add salt. Place in the oven 200degC/Gas mark 6 for 20-30 minutes or until tender.

Mussels in White Wine (per person)

Dice the onion and chop the chives. Heat a thick bottomed pan. In a bowl put the mussels, wine, garlic and onion. When the pot is hot pour the contents of the bowl into the pot and cover with a lid. When all the mussels have fully opened, add the cream and chives. Stir with a spoon.

Cut the apple into 1/2 inch slices. Place the apple on each round and cook in the oven at 200deg C / gas mark 6 for 7 minutes. Boil the brown sugar, butter and cream and whisk together to form the toffee sauce. Coat each tart with sauce.

Peel and finely chop the onions. Peel and finely chop the potatoes. Put the haddock in large pan with 300ml (¾ pt) water. Bring to the boil and simmer for 5-10 minutes until the fish is just cooked. Remove the fish and flake into large chunks. Add the onions and potatoes to the pan with plenty of white pepper. The water should cover the vegetables. If not, add some milk. Cover and cook for 12-15 minutes. Then add the milk and butter and bring to the boil. Then simmer for 3 minutes. Blend. Season. Sprinkle with chopped chives.

Toast the oatmeal in the oven, soak with whisky. Whisk the cream into a soft consistency. Add the oatmeal, honey and half the mashed raspberries. Roughly mix. Pipe into glass (disposable piping bags are adequate) layering rest of the raspberries (leaving one). Garnish with raspberry and fresh mint. 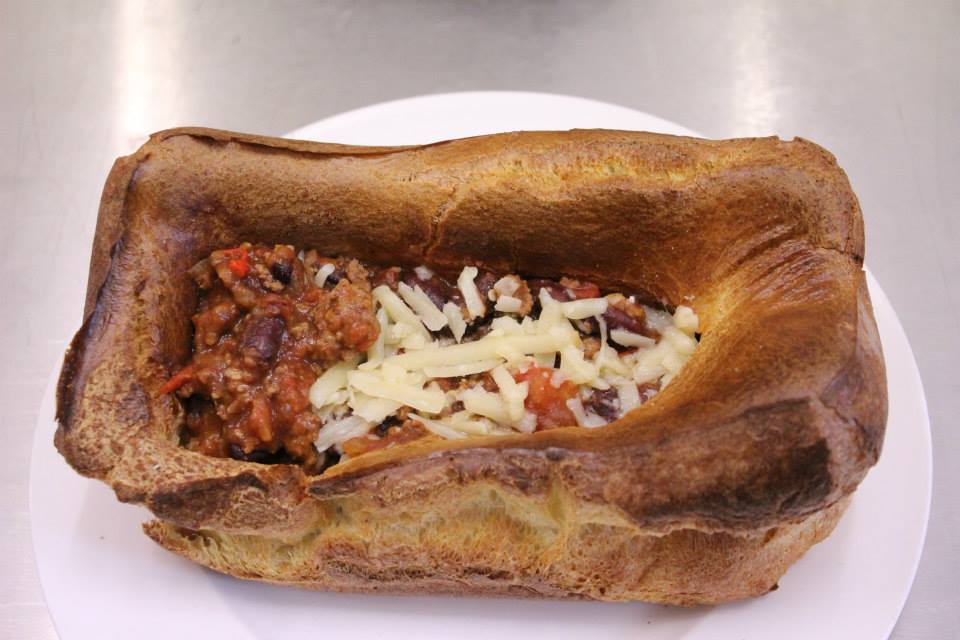 Soak peas for 24 hours. Chop onion and peel and chop the potato. Chop the cooked ham. Melt the butter in a pan, Add the onion. Cook until softened. Add the potato and peas. Cover with stock. Bring to the boil. Simmer for 20 minutes until the peas are soft. Roughly mash.

Mix the oil, salt and potatoes together and lay on a roasting tray. Add salt. Place in the oven 160degC/Gas mark 4 for 40 minutes or until tender. Add rosemary 5 minutes before the end.

Roast Rib of Beef – Topside or Sirloin or Ribeye

Season meat and place in a large tray in the oven. The cooking time will depend on the size of the joint.

Beat eggs slowly in a bowl. Add the milk and water. Slowly add the flour until you make a thick batter. Season. Let rest for 30 minutes.

Melt the butter. Add the sugar. Cook the sugar until it caramelises. Add the cream

Preheat oven to 180ºC/360ºF. Cream together the butter, sugar and vanilla. You can do this by beating it in a bowl with a wooden spoon for about 5 minutes, taking care to break up the crystals and smooth the mixture out as much as possible. Or do it using an electric blender if you prefer. Add the eggs, one at a time, beating in after you’ve added each egg. Fold in the flour. Now, bring the water to the boil and add the dates. Add the baking soda and immediately take the pan off the heat. Let it cool slightly, then add to the mixture.

Pour the mixture into a greased cake-tin (make sure you use one with enough room for the cake to rise!). Bake in the oven for 40 minutes, until a skewer inserted into the cake comes out clean. Remove from the oven and set aside to cool a little while you make the sauce. To make the sauce: Mix the four ingredients in a saucepan. Heat gently, stirring often to make sure that the mixture doesn’t separate.

Once the mixture looks like a smooth sauce and is nice and warm, it’s ready. Don’t allow it to bubble. Divide the cake into portions and poke holes all over the top with a skewer or chopstick. Pour the sauce over the top of the cake, making sure it gets in the holes. Serve with cream, custard, or ice-cream.

The Cookery School ran in Glasgow for nearly 20 years with over 70,000 customers in that time before closing down in 2015.